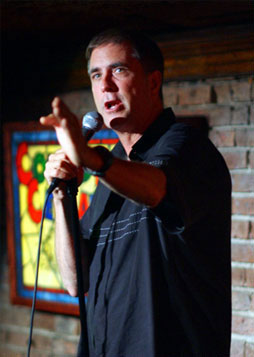 He has made sixteen appearances as Karl Allard on Brian Koppelman, David Levien and Andrew Sorkin’s  current hit BILLIONS on Showtime – Sean Collins of the NY Times (6/3/18) said of Allan’s performance “as always, a perfectly laid-back foil for Paul Giamatti’s measured bombast.” Other recent television appearances include GLOW on Netflix, Judd Apatow’s LOVE on Netflix, and BOSCH on Amazon.

Allan had ten guest spots on LATE NIGHT WITH DAVID LETTERMAN. He was featured in the COEN BROTHERS film HAIL CAESAR!, and guest-starred in Apatow’s CRASHING on HBO. Other television appearances include BOSCH, LOUIE, SEINFELD, THE OFFICE, CURB YOUR ENTHUSIASM, MAN IN THE HIGH CASTLE, 2 BROKE GIRLS, CODE BLACK, UP ALL NIGHT, THE SARAH SILVERMAN PROGRAM, FREE RIDE and MEN OF A CERTAIN AGE. He made numerous appearances as a guest commentator on THE KEITH OLBERMAN SHOW.

Originally from Miami, Allan arrived in New York City in 1978 and became a regular in comedy clubs around the city after “passing” at the legendary IMPROVISATION.

In 1984 he was cast by LORNE MICHAELS in THE NEW SHOW, working with STEVE MARTIN, JOHN CANDY, BUCK HENRY, GILDA RADNER and a host of others. In 1989 Allan was handpicked by HBO to be one of the initial hosts of The COMEDY CHANNEL, which later became COMEDY CENTRAL. He created, hosted, and produced NIGHT AFTER NIGHT WITH ALLAN HAVEY, which ran for three years and became a cult classic. During this period he also wrote and starred in two comedy specials for HBO; both were nominated for CABLE ACE AWARDS.

Allan’s film credits include HANCOCK with Will Smith, THE INFORMANT with Matt Damon, ROUNDERS with Ed Norton, INTERNAL AFFAIRS with Richard Gere, CHECKING OUT with Jeff Daniels, and the Jerry Seinfeld documentary COMEDIAN. He is also featured in the comedic documentary THE ARISTOCRATS.