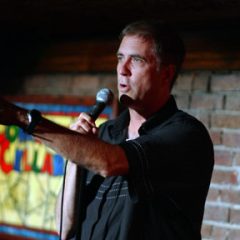 Allan Havey is considered one of the best stand-ups working today. The New York Times called him “cocksure, irreverent, and very funny.”

Originally from Miami, Allan arrived in New York City in 1978 and became a regular in comedy clubs around the city after “passing” at the legendary IMPROVISATION. In 1984 he was cast by LORNE MICHAELS in THE NEW SHOW, working with STEVE MARTIN, JOHN CANDY, BUCK HENRY, GILDA RADNER and a host of others.

In 1989 Allan was handpicked by HBO to be one of the initial hosts of The COMEDY CHANNEL, which later became COMEDY CENTRAL. He created, hosted, and produced NIGHT AFTER NIGHT WITH ALLAN HAVEY, which ran for three years and became a cult classic. During this period he also wrote and starred in two comedy specials for HBO; both were nominated for CABLE ACE AWARDS.

Allan made 10 appearances on LATE NIGHT WITH DAVID LETTERMAN, and was a frequent guest commentator on THE KEITH OLBERMANN SHOW.

Allan Havey is considered one of the best stand-ups working today. He is also an accomplished actor, starring as “Lou Avery” in eleven episodes of AMC’S highly acclaimed MAD MEN.

"The best I ever saw was on New Year’s Eve, 1992 or 1993. Allan Havey, who is one of the best comics I have seen. The toughest spot in comedy to me was the post-midnight Cellar spot...I never saw a guy in a headwind like that. To turn a room around from chaos and distraction to just focused, rolling laughter. To me that was one of the best things I ever saw." — Jon Stewart "An Oral History of the Comedy Cellar"